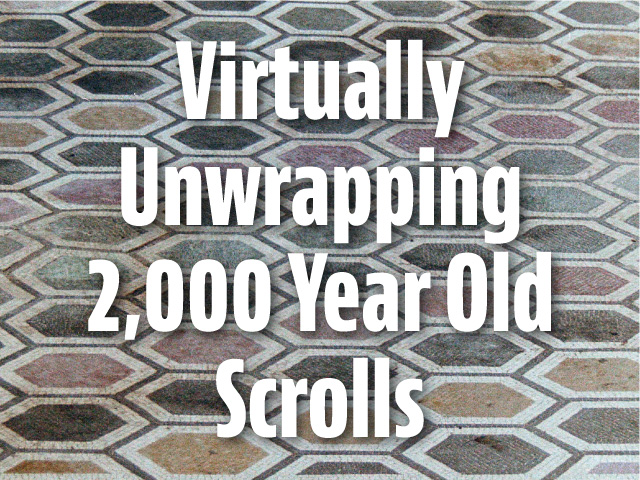 Visitors to Fondren Library can view the exhibit located on the First Floor near Woodson Research Center.

When Mt. Vesuvius erupted in 79 AD, it buried not just Pompeii but also the nearby city of Herculaneum (modern day Ercolano). A large luxurious villa, called the Villa dei Papiri (Villa of the Papyri), was partially excavated through tunneling in the 1750s.  The unique finds include 1,100 papyrus scrolls that were carbonized into charcoal by the volcano’s eruption. This is the only intact library from antiquity to survive making these scrolls highly valuable. The challenge has been to read these scrolls. Various attempts to physically unroll the scrolls have been unsuccessful, resulting in only fragments being recovered. Most of the scroll fragments that are readable are primarily the work of Hellenistic Epicurean poet and philosopher Philodemus of Gadara.

Prof. Brent Seales and the Digital Restoration Initiative at the University of Kentucky are working with micro-CT scans and other advanced technology, including a machine learning algorithm, to reveal the carbon ink (distinguished by its lead content) on the scrolls to virtually unwrap them to reveal their contents. In August 2019, three scrolls traveled from the Biblioteca Nazionale di Napoli in Italy to the University of California, Los Angeles to be scanned in a sophisticated imaging lab. Seales and his team will use these scans to further develop a specialized computer learning tool designed to show the text wrapped within the scrolls without destroying them.

After being scanned at UCLA, the three scrolls were featured in the "Buried by Vesuvius: The Villa dei Papiri at Herculaneum" exhibit at the Getty Villa from June 26–October 28, 2019.

The Herculaneum scrolls that were found are held by four institutions. The Institut de France has six scrolls in its possession. The Bodleian Libraries at Oxford University has four scrolls in its collection. The British Library has eleven fragments and five scrolls. The remaining scrolls are at the Biblioteca Nazionale di Napoli.

The Getty Villa in Pacific Palisades, California is a reproduction (not a copy) of the Villa dei Papiri and has copies of the bronze statues placed in its garden where they were discovered in the Villa dei Papiri.  J. Paul Getty built it to house his expanding art collection in the 1970s based off of drawings made by Karl Weber in the 18th century and other architectural elements found in ancient buildings around the Bay of Naples. See the Getty Villa’s website: https://www.getty.edu/visit/villa/

● “Roman holiday, 40BC: an in-depth view of the Villa dei Papiri, the inspiration for the Getty Villa” by Andrew Wallace-Hadrill, The Art Newspaper, July 17, 2020. Go here: https://www.theartnewspaper.com/review/roman-holiday-40bc

● “Buried by the Ash of Vesuvius, These Scrolls Are Being Read for the First Time in Millennia” by Jo Marchant, Smithsonian Magazine, July/August 2018. Go here: https://www.smithsonianmag.com/history/buried-ash-vesuvius-scrolls-are-being-read-new-xray-technique-180969358/

● "Herculaneum: Past and Future" by Andrew Wallace-Hadrill (Packard Humanities Insitute, 2011)

● “Inside Roman libraries: Book Collections and Their Management in Antiquity” by George W. Houston (The University of North Carolina Press, 2014)

● "The Library of the Villa dei Papiri at Herculaneum" by David Sider (J. Paul Getty Museum, 2005)

● “Philodemus in Italy: the Books from Herculaneum” by Marcello Gigante (University of Michigan Press, 1995)

● “The Villa of the Papyri at Herculaneum: Archaeology, Reception, and Digital Reconstruction” by Mantha Zarmakoupi (De Gruyter, 2010)

Books of Interest in Italian:

Julia Kress visited Herculaneum twice and was able to visit the Villa dei Papiri excavations in Sept. 2005, when the photographs on this webpage were taken. For more information, please contact her at jekress@rice.edu. 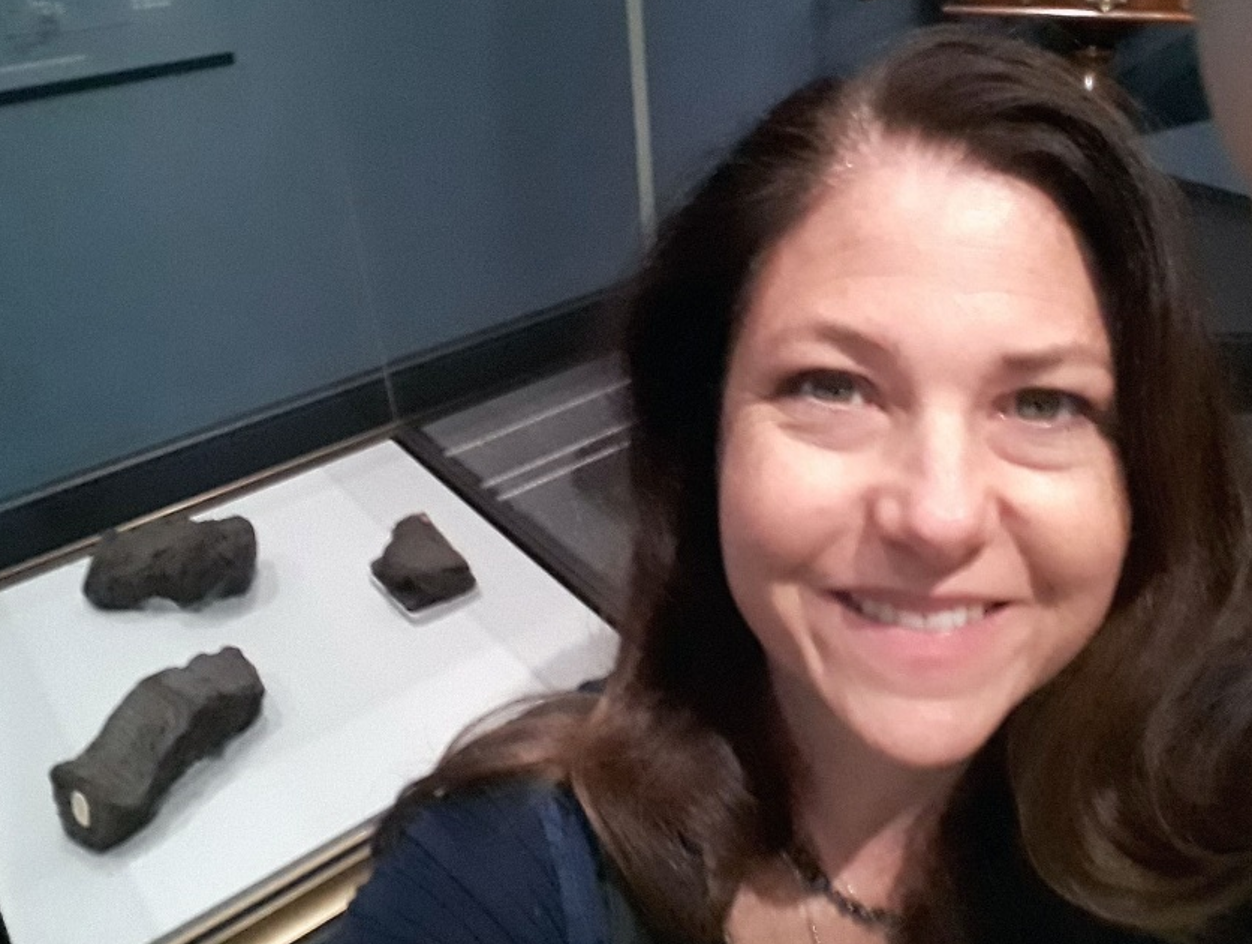 Kress is pictured with the three papyri scrolls on display at the Getty Villa, Oct. 2019 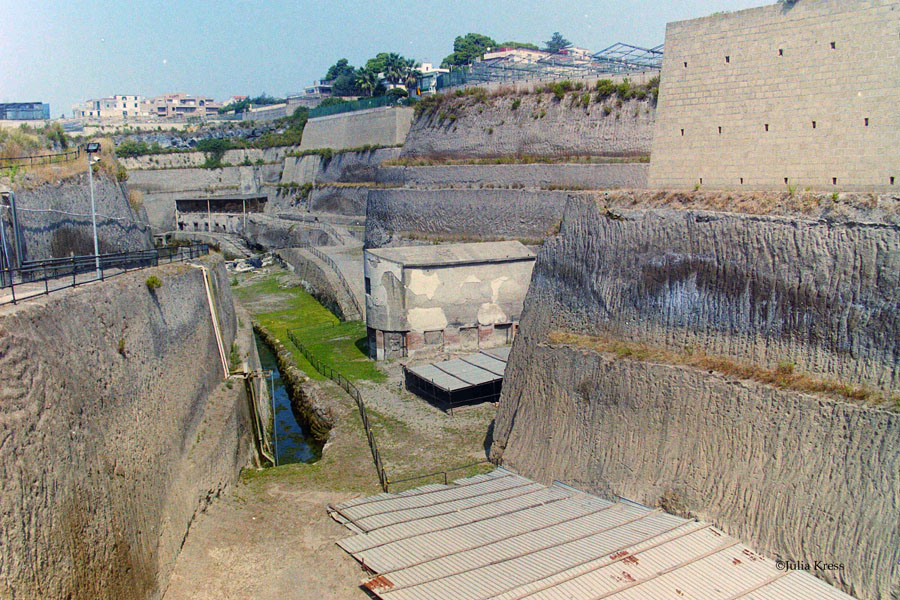 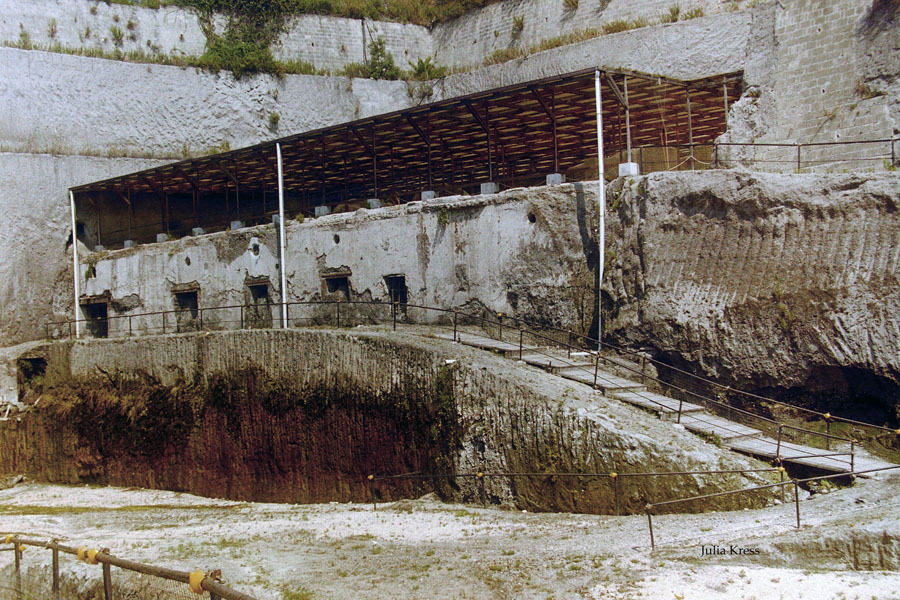 Closeup of Villa dei Papiri, main building with atrium that faced the sea 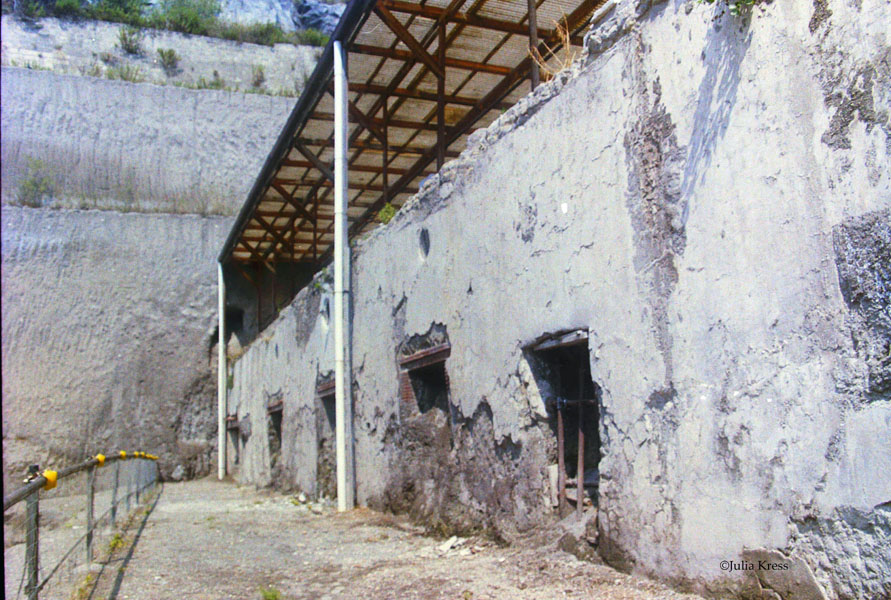 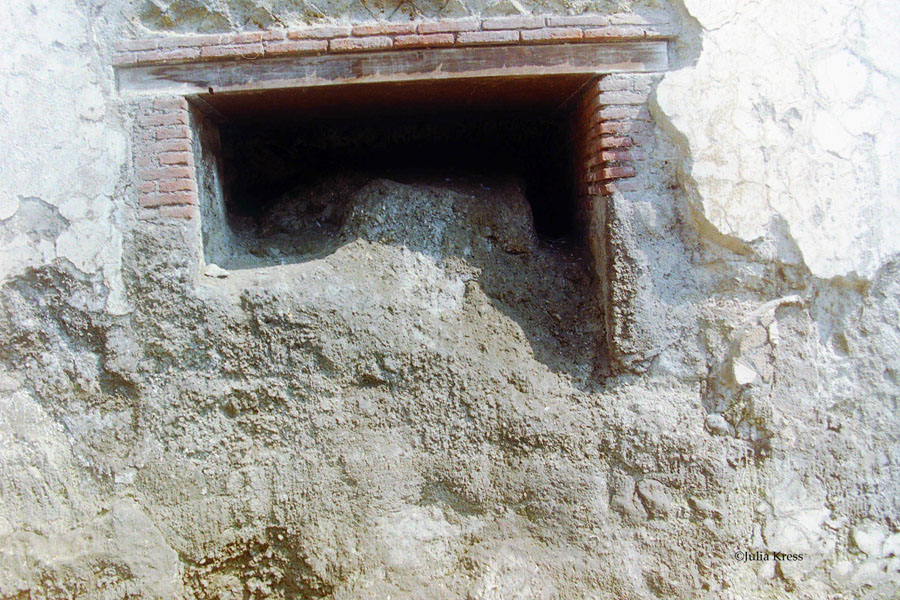 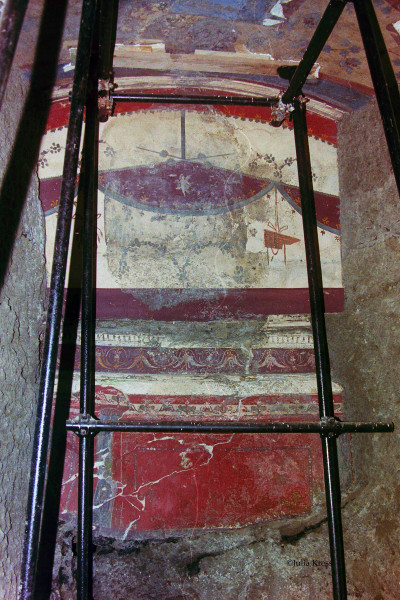 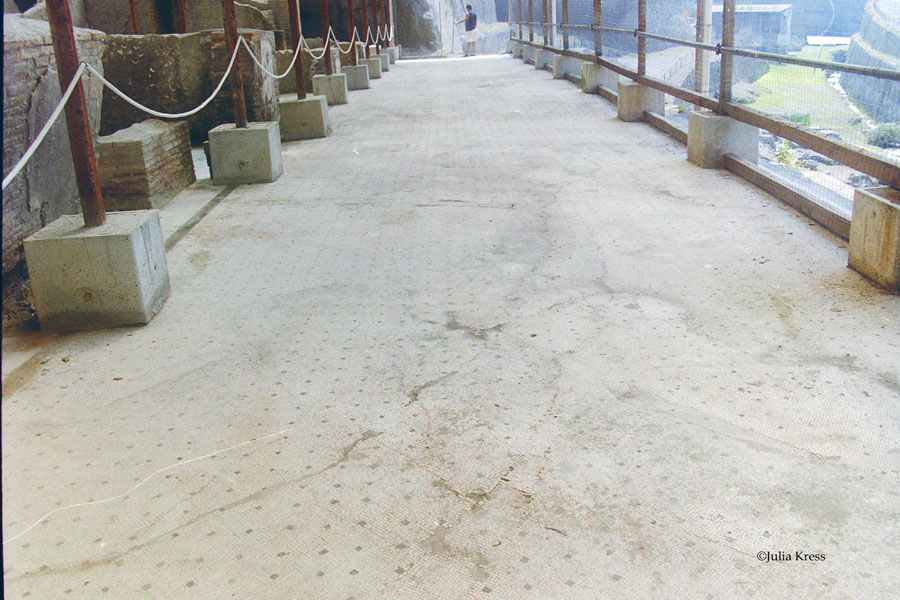 Ancient porch along upper story (likely fourth floor) of Villa dei Papiri (near atrium), which overlooked the Bay of Naples 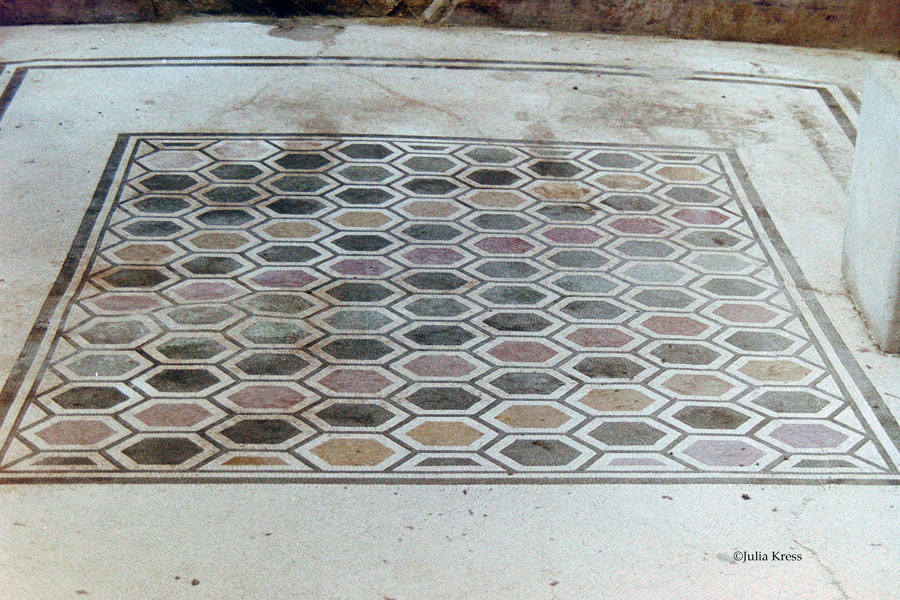 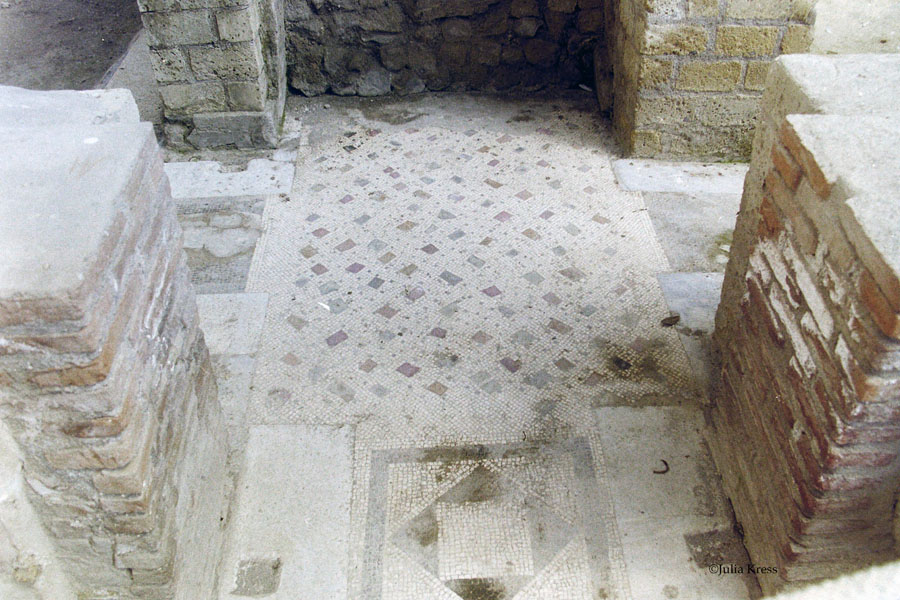